You Can Use Your Fitbit™ To Help Your Dog Lose Weight 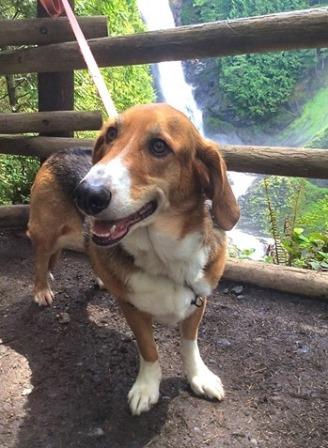 Hawthorne Hills Veterinary Hospital is honoring Penny and her owner as Pet and Owner of the Month for July 2016. Their journey highlights a commitment to being healthy, a creative way to help your best friend lose weight and together they epitomize the bond that can develop between a ‘rescue’ dog and a new owner.

Here is their story as told by the owner:

Penny is a 4 year old Beagle/Basset Hound/mutt who we rescued from the Humane Society in Albuquerque New Mexico. it was love at first sight, I got down on the floor to say hello, she jumped onto my lap, tail wagging and immediately licked my face, we knew she was ours, and we got to take her home that day. Just looking at her sweet face brings us joy every single day, and our families love her as their own and look forward to time they get to spend with her over vacations and holidays. Our parents share her pictures with their friends as their “grand dog”. Penny loves to travel, is great in the car and has road tripped to Denver CO, Bismarck ND multiple times, and to San Diego, CA.

During our first new patient appointment with Penny at Hawthorne Hills this past December, after our summer move to Seattle from New Mexico, we were embarrassed to learn that she had become overweight. She weighed in at almost 65#! Though we knew she had likely gained a few pounds, as happens with us humans, it’s hard to recognize slow weight gain over time until it’s an issue. 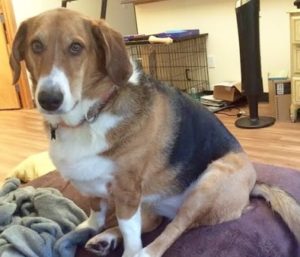 Penny at her heaviest – almost 65#

Back home in NM, Penny had a best friend dog who’s house she’d spend the day at while we worked, where she could run and play in a huge secure yard and dog run, as well as regular trips to the desert to chase each other off-leash. The move to a small apartment and the rainy, cold weather this fall and winter had caused us all to become more sedentary, and we hadn’t adjusted.

We immediately adjusted Penny’s food intake (as recommended by the wonderful staff at Hawthorne Hills) from 1 cup per meal to ¾ cup per meal, and strictly adhered to that diet, as well immediately stopping use of “treats” and instead using a piece of her regular food for a treat when training. These adjustments were easy to make.

It was more difficult to get started on increasing her physical activity (especially while the below 0 temperatures in North Dakota over Christmas made it miserable to want to take long walks!) but it was something we knew needed adjusting. Before we knew it, January had also passed by. I (Penny’s Mom) realized in early February, that not only did Penny need a change, but I did as well, I had become pretty depressed, and needed to do something.

Penny’s dad is a Grad Student at UW, so during the school year he was simply just way too busy to be able to help. I remembered that I had a Fitbit™ that I had stopped using after the summer, and it was collecting dust in a drawer. I looked at Penny one sunny February morning, feeling ready to take some action, decided to put on my Fitbit™, put Penny’s harness on her, and just go outside and run. I had always hated running, but it seemed like something I could do for free, to get out in the sun, and hopefully pump some endorphins up in my system, more importantly, though, was my concern for Penny, I remembered how much she loved to run and run with her friend in the hills of the desert, and I knew I had a responsibility to her to be a good mom. 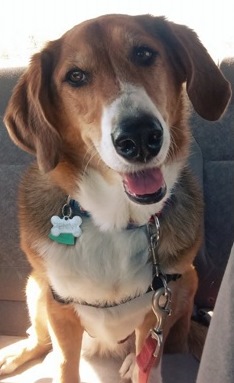 Penny after a run in April – 10# weight loss

That first day, we made it 1 mile and the smile on her face and the way I felt (though tired) was priceless, it was therapeutic. The next morning, I decided to do the same, so we strapped on our gear and went again. After about a week I realized this was a habit we could get into, it was good for Penny and for me, it was something we could do together.(I feel I should note, when I say “run” it started as jogging, we aren’t too fast, my pace could be described as a quick jog, and Penny as a trot or gallop, our paces work great together) I almost immediately saw a change in her, a tired dog is a happy dog, and even on our “walk” days, she was wanting to run.

I decided to make the commitment to become “friends” through Fitbit™ with my brother, (Penny’s Uncle) to keep ourselves accountable. Not only could I track our mileage to make sure she was getting a steady consistent amount of good exercise, but he would help keep us accountable as well. For us, the use of our exercise tracking device gave me a goal, something to strive towards, and even on those rainy days to come, I knew I had a goal of time and distance Penny needed to either run or walk each day to stay consistent, it gave us an assignment to complete together, and a feeling of accomplishment when we succeeded. As we both built endurance, we both felt better.

Penny and I started to adhere to a beginners walk/run program, with encouragement from Penny’s uncle, after he realized what consistent work we were doing through our shared Fitbit™ stats. On “Run” days, we’d jog about 1.5 miles, and then do some extra walking. On “Walk” days, I made sure we had one “long” walk of 45-60 minutes, and a “shorter” evening walk of about 20-30 minutes. With the use of our Fitbit™, we plotted out different routes through the nearby park, and around the neighborhood in order to get our consistent distance and time. 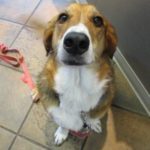 Penny at her weigh in at Hawthorne Hills Veterinary Hospital

We took Penny in for a weight check prior to her dental cleaning, towards the end February, and we were surprised and THRILLED to learn that she had lost just over 10 pounds since December! This was only even more encouragement to keep going further and longer as we were both getting stronger. 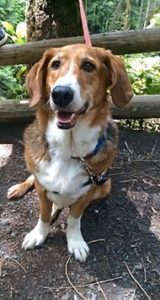 Happy and healthy at 44 lbs

For some more encouragement, as I realized that having a goal really worked for us, I signed up for a 5K run, and gradually through the next 2 months we worked our way up to being able to run that distance together. The first day we both ran 3 miles was exhilarating, and Penny was content to nap the rest of the day!

Running with Penny made running fun, having her out with me gave me a buddy, some great bonding time for us together, making the exercise about HER was a good distraction for me, and something I knew I needed to complete, for HER. We saw strength and weight loss for her (she went from wanting to be lifted onto the bed, to being able to hop up without even a running start!) and she seemed more content, happy, and relaxed. She’s always been a happy dog, but now she beams.

We are thrilled, now, to report that Penny’s most recent weight check at the end of June clocked in at 44 pounds! 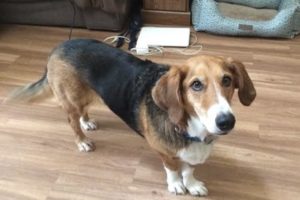 She’s inspired me to keep exercising as well, but now I have to go alone on my “long run” days as Penny’s run distance tops out at around 3 miles at a time. We still run together on my “short run or Run/Walk” days, and she is consistently getting good long walks and of course, enjoying more walking time with her Dad now that its summer!

We both feel better and stronger than ever, and all we needed was a buddy, an assignment, encouragement, accountability, goals, and some consistent tracking! I know running isn’t for everyone, and for most of my life it wasn’t for me either, but Penny and I working together to be healthier has made us both happier! I started just wanting to help her be healthy, but she has helped me even in ways that are un-measurable. With a strict amount of food, no “treats”, and increased consistent activity, she’s been more successful than I could have imagined, if we can do it, I PROMISE you can as well!

For other information on pet obesity click on these links: