The Sneezing Cat- The Fungus Among Us

Home » The Sneezing Cat- The Fungus Among Us

December’s Pet of the Month is one of our veterinary assistant’s cats named Gus. Emily, adopted him from the humane society in March of this year. Just after adopting him, she brought Gus into Hawthorne Hills Veterinary Hospital to be examined and ensure he was completely healthy. The veterinarian examined him and drew blood for routine blood testing. Gus was determined to be very healthy and his blood work was normal as well.

Five months after adopting Gus he came down with a cold. He was sneezing and had watery, red eyes. The veterinarian examined him and treated him for a viral upper respiratory infection with eye drops and an l-lysine supplement to boost his immune system.

Gus’s eyes quickly returned to normal but his sneezing continued and worsened over the next 2 weeks. Gus was then re-examined and placed on an antibiotic Doxycycline for a bacterial upper respiratory tract infection. 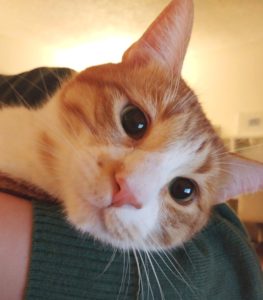 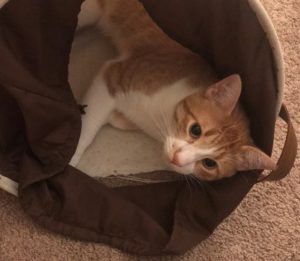 Gus completed the antibiotic course but unfortunately, he did not improve. He was still sneezing frequently and was now snoring when he slept and he sounded congested all the time.

Gus was sedated so a thorough oral exam could be done, as well as x-rays of his nasal passages. Both of these were normal. While under sedation Gus’s nasal passages were flushed with sterile saline and samples taken for cytological testing. Gus’s blood was also drawn to test for fungal testing.

Cryptococcus is found in bird feces (particularly pigeons) and in decayed wood/tree bark. Cats become infected when the fungus is inhaled. It is slow growing and Gus was likely already infected when he was adopted. With nasal infections cats can sneeze, have nasal discharge and snore. Cryptococcus can spread to the nervous system as well, potentially causing seizures, circling, head tilt, stumbling, behavioral changes and weakness. The fungus can also cause ulcerative skin lesions and/or nodules. 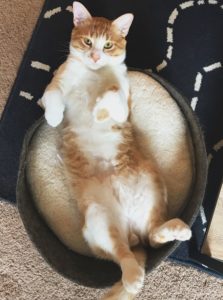 Gus’s clinical signs were only sneezing, congestion and snoring. The treatment for cryptococcus infection is an oral anti-fungal. The treatment course is very long- average treatment time is 6-8 months, sometimes years.

Gus was started on an oral anti-fungal for the last month and is much better. The snoring has stopped and the sneezing is much better. Gus will have his blood rechecked in 5 months to see if the fungus has been cleared.

Whiled 90% of sneezing cats have a viral or bacterial upper respiratory infection, it is important to follow-up and investigate the less common causes of sneezing.

2 thoughts on “The Sneezing Cat- The Fungus Among Us”