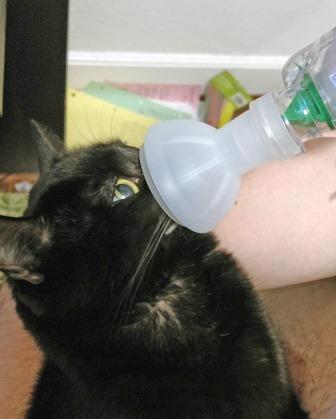 What Do You Do When Your Cat is Constantly Coughing?

Everyone who has lived with a cat knows the sound of a ‘hairball’ cough. However, did you know that cats bringing up hairballs aren’t really coughing? They are regurgitating fur from their stomach, and we now know that vomiting hair really isn’t normal for cats. 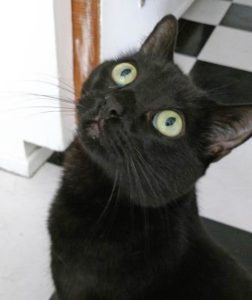 True coughing, which actually involves the respiratory tract also isn’t normal for cats if they are doing it with any regularity. Our Pet of the Month for June is Claudia, a sweet 6 year old Black DSH kitty. Claudia has a history of past upper respiratory symptoms (URI) thought to be associated with Herpes virus which is quite common in cats, especially if they have been through a shelter system. However, earlier this year Claudia started coughing and wheezing. Over a week or so, her episodes increased such that it was happening multiple times a day. She was crouching down with her head and neck extended, acting like something was stuck in her throat. She was also sneezing but didn’t have any discharge from her nose or eyes and her appetite was good.

A physical exam at Hawthorne Hills Veterinary Hospital was in order. During the visit Claudia was exhibiting some increased respiratory effort – when watching her breathing we could see that there was more effort, but listening to her lungs everything sounded normal. She was a healthy cat in all other respects.

Coughing can be a symptom of many different diseases or processes:

In order to understand why Claudia was coughing we collected blood, urine and stool samples. We did not find any evidence of intestinal parasites and there was no indication of any systemic disease that was contributing to her symptoms. The next step was getting radiographs of her chest and abdomen. This gave us an inside look at the size and shape of her heart, as well as information about her lungs, and ensured that her abdominal organs all appeared normal. The radiologist made mention that there were some ‘bronchial markings’ noted in several areas of Claudia’s lungs; however, sometimes the radiographs look normal even when there is airway disease.

Based on our physical examination, Claudia’s symptoms and the results of her diagnostic testing, a presumptive diagnosis of allergic airway disease was made. An additional step that was discussed was doing an airway bronchial wash to collect cells from deep in the airways. This test would have been essential if we suspected infection or cancer, and will still be considered if Claudia’s symptoms progress in the future. 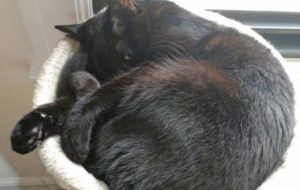 Interestingly, after Claudia’s exam and testing, her coughing subsided and she had no episodes at all for a week or so. Then the coughing resumed and she was having up to five attacks during the night. Feline Asthma is a common respiratory ailment of cats that occurs in episodes – the inflammation that is present in the airway can come and go, and cats can have periods where they appear normal. This can make it confusing for pet owners and also for veterinarians. Ultimately almost all cats require treatment to provide comfort and to control the symptoms. There are a variety of approaches depending on the cat and the severity of their symptoms. Claudia is a compliant kitty so her owner elected to try her on an asthma inhaler. Long term this option carries the least side effects and can be very effective for controlling episodes. We are pleased to report that Claudia has responded extremely well; she and her owners have developed a routine of lap time while using the inhaler and treats afterwards for good behavior.

Here is a video of Claudia using her inhaler:

For more information on Feline Asthma: