Dogs eating things they should not – Dangerous Overindulgences! 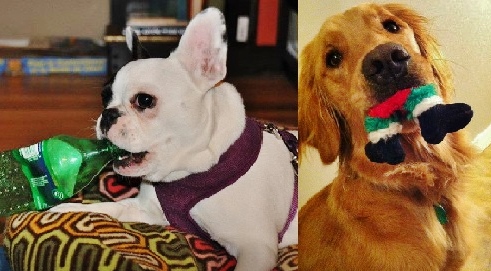 We all overindulge during the holiday season but it can be much more scary and dangerous when your pet participates. Many of our patients have had to be treated for ingesting things even in the last few months.

Bodie is a 1 ½ year old black labrador who loved the taste of his pain medications. A few weeks before Christmas, Bodie ate the entire bottle of Rimadyl that was prescribed to him because of a limp. Just like in humans, overdoses of NSAIDs in dogs can be very dangerous causing liver and kidney failure and intestinal ulcerations. He had an after-hours emergency visit to BluePearl Emergency Hospital.  Luckily, his owners got him care very soon after ingestion and he vomited the medication.

He did not show any bloodwork or symtomatic abnormalities and was sent home on pain medications and stomach protectants. If his care had been delayed even a few hours he may have had to spend several days in the Intensive Care Unit recovering from kidney and liver damage. Luckily, while he is still a crazy, curious lab and has eaten or tried to eat more things than his owner can remember, he has not had to be hospitalized for any other dietary indiscretions.

Gilmore, a King Charles Spaniel was very persistant in getting to his owners candy dish by climbing on the table. After Gilmore ate several milk chocolate hearts before Valentines day he was treated by our doctors and staff for chocolate toxicty. After some follow up care at the emergency hospital all the stress caused his poor owner to go into early labor! Gilmore recovered well and is now happy and healthy with his new human sibling.

Oliver is an energetic 5 year old Golden Retriever who has a passion for eating things. We have treated him for eating bones, socks, baby feeders, chocolate and we have to keep a close eye on him in the hospital because he apparently finds bandages delicious. All this has added up to several bouts of vomiting, diarrhea, and x-rays. He has been lucky enough to avoid surgery for foreign body removal so far! Good thing he is such a lovable, sweet boy and usually cooperative when we need him to cough something up.

Not even the doctors here at Hawthorne Hills Veterinary Hospital can keep their pets away from dangerous things. Pippa is Dr. Brandi Eskesen’s 4 year old French Bulldog.  While she has a hearty appetite and will eat most things that are put in front of her face, she has never actively searched out food, scavenged through groceries, or knocked over the garbage.

One week before Christmas, Dr. Eskesen came home to find Pippa chewing on a bag of jelly beans. The jelly beans would not have been too big of a problem but there were also chewed pieces of 2 dark chocolate bar wrappers nearby.  Dr. Eskesen knew that she had purchased 3 chocolate bars but there was no trace of the 3rd.  Chocolate can be extremely toxic and even lethal to cats and dogs.  Depending on the dose of chocolate, symptoms can range from mild diarrhea to vomiting, seizures, heart arrythmias and death.  Three whole dark chocolate bars in a 16 pound Frenchie could be deadly.

Dr. Eskesen rushed Pippa to Hawthorne Hills Veterinary Hospital where licensed technicians and assistants were ready with all the equipment and medication to help Pippa. She was examined and shown to not yet be showing any symptoms of chocolate toxicity.  Now was the time to get the chocolate out!  Allison (our technician) and Dr. Eskesen gave Pippa an injection of a medication that made her throw up.  It worked very quickly and within a few minutes she had produced 6 large piles of chocolate vomit and some bits of surrounding wrappers.  After the was finished vomiting, Pippa received an injection to stop further vomiting and was administered activated charcoal to help bind up anymore chocolate that might have stayed in the stomach and small intestine.  She got some fluids under her skin to help replace the water she lost in the vomiting and was feeling much better.  Pippa was back to normal within 2 hours after entering the hospital.

Dr. Eskesen and her family had something extra to be thankful for this holiday. They credit quick action and appropriate treatment with saving their beloved pet’s life even before Pippa knew anything was wrong.

There are thousands of toxins around for your pet to consume, absorb, or inhale and we know that you cannot prevent them from ever encountering dangerous substances.

Please call us as soon as you suspect that your pet has gotten into something dangerous.  We can give you further advice whether it be monitoring at home, coming straight to the hospital, or calling the ASPCA

The hotline is especially helpful for more obscure toxins and human medications as they have board certified Veterinary Toxicologists on staff to assess the danger.  The doctors at Hawthorne Hills Veterinary Hospital can also call them to consult on a cases.  The ASPCA website is also a good one to reference if you are unsure how dangerous a substance is: https://www.aspca.org/pet-care/animal-poison-control.

Beside chocolate, other common food items that you should keep away from your pet are:

Our Seattle Veterinarians have some interesting stories of things pets have eaten and even have some of the evidence around the hospital still.