I think my pet has something stuck in his throat. 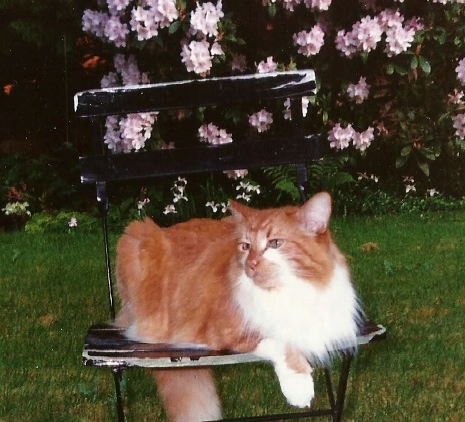 “I think my pet has something stuck in his throat”.

It’s a phone call that we get fairly often at Hawthorne Hills Veterinary Hospital. And it’s something every Seattle pet owner has likely worried about when they hear their pet coughing, gagging, or making that ‘aack’ sound followed by attempts to throw-up. Dogs are frequently chewing on items they aren’t supposed to but not everyone realizes that cats do the same thing. And yes, sometimes things really do get caught in their throats.

Hawthorne Hills Veterinary Hospital is honoring Gus as Pet of the Month for October. Gus is a handsome orange and white cat with an adventurous spirit and a penchant for doing the unexpected. Not too long ago Gus’s astute owner was concerned because Gus wasn’t eating like normal and he was coughing, hacking and spitting up saliva. In addition, the normally talkative Gus wasn’t as vocal as usual.

Now you might think that being 15 years old Gus would have gained some insight into things cats shouldn’t do. Unfortunately Gus has an affinity for grass. Not just plain old backyard grass but fancy ornamental grass. Several years ago Gus had swallowed grass that got caught in his throat and his owner was certain that Gus had again swallowed some blades that were now stuck.

So Gus and his owner made a trip to see Dr. Robin Riedinger. In the exam room Gus was breathing fine but making multiple attempts to swallow. We often refer to this as ‘heavy swallowing’ – it’s a much more pronounced effort to swallow. Anyone who remembers being a kid and having to eat a food you didn’t like will recognize this feeling; the attempt to get something down the hatch that just doesn’t want to go.

We couldn’t see anything when looking into Gus’s mouth and he was growling his displeasure so with the help of a short acting sedative we were able to get a much more thorough look. The back of Gus’s throat was red and quite swollen (that’s the bright pink tissue visible in the back of his mouth) which explained part of his discomfort.

Using a moistened cotton swab we were able to push the tissue out of the way and voilà – not one but two blades of ornamental grass were lodged in his throat! Tiny barbs all along the surface of the grass had grabbed onto the soft tissues in Gus’s mouth and prevented the grass from going down or coming back up. Fortunately, we were able to remove the grass (the blades were 3.5” long) with special forceps and while it took a couple days, Gus is back to normal and feeling great.