Does a Sensitive Stomach Cause Your Dog to Eat Odd Things?

Home » Does a Sensitive Stomach Cause Your Dog to Eat Odd Things? 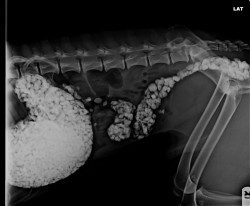 Our Seattle veterinarians explore why your dog may be eating odd things.

Inflammatory Bowel Disease is an increasingly common condition that affects both dogs and cats. The underlying causes are varied and the veterinarians at Hawthorne Hills Veterinary Hospital are here to help guide you. We are profiling Gunner, an energetic three year old Labrador Retriever as our Pet of the Month for September. His story illustrates some of the frustration and challenge associated with this disease, treatment approaches and also includes an unusual twist that allowed us to get a definitive diagnosis.

As is typical of many young dogs, especially food obsessed Labs like Gunner, he had several episodes of ‘dietary indiscretion’ during his first year. He was diagnosed with Giardia which he likely got drinking contaminated water, and he stole some sautéed onions off of the stove resulting in a trip to the ER. Understandably his intestinal tract sometimes suffered the consequences and he had intermittent soft stools, diarrhea, intestinal gas, and burping, despite having a robust appetite and otherwise showing no ill effects.

In the following months, when Gunner’s intestinal symptoms became more persistent, his owners made several changes in the types and brands of foods they were feeding, hoping to find a perfect solution. Gunner’s owners received advice from their breeder and from the folks at the local pet stores and they even tried over the counter ‘anti-gas’ pills to no avail. Intestinal upset in our pets can be quite frustrating and it is understandable when owners want to try to solve the problem on their own. Sometimes we get lucky and a simple food change resolves the problem. Unfortunately, many cases require a focused approach to achieve long lasting success.

Gunner’s recurrent symptoms were suspicious for Inflammatory Bowel Disease (IBD) so with the guidance of Dr. Robin Riedinger a specific treatment plan was formulated. IBD can involve food sensitivities or true allergies, but often is a consequence of immune system changes. We elected to address the food aspect first. Gunner was initially started on a highly digestible intestinal food, yet his stools were still soft, so he was transitioned to a high fiber food designed for dogs with colitis. He was also given a course of deworming medication to eliminate any possibility of intestinal parasites. We eventually added in an additional medication to help stabilize the bacteria in Gunner’s intestinal tract and address continued intestinal gas. Gunner’s stools improved to normal and remained stable for a number of months.

X-ray of rocks in Gunner’s Stomach

In July of this year, Gunner dined on rocks at the beach, leading to a stomach and intestinal tract filled to the brim. We don’t know if there was something about the rocks that attracted Gunner, or if he ate the rocks because of his intestinal disease. However, the only solution was surgery to remove almost 3 pounds of gravel. The surgeons took the opportunity to sample multiple sections of Gunner’s intestinal tract so, in addition to solving his bellyache, we now have a definitive diagnosis for Gunner’s symptoms. That allows us to concentrate on specific treatments and fine-tune the plan based on Gunner’s responses.

Inflammatory Bowel Disease requires a lifetime of monitoring and adjustments to the food(s) the patient can eat and the medications that are necessary to keep the intestinal tract functioning well.

Here are links for more information: