Why is your dog or cat not eating as much? It’s time to see your Seattle veterinarian!

Home » Why is your dog or cat not eating as much? It’s time to see your Seattle veterinarian!

Vladimir, a 9 year old neutered male Corgi mix, came to Hawthorne Hills Veterinary Hospital in Seattle, WA after his owners noticed their four legged friend acting sluggish and not eating as well for the past 36 hours. In addition to a weepy eye and diarrhea that had been noticed recently, his owners informed Dr William Riley that Vladimir had gotten into a fight with another dog 2 weeks before. He had acted sluggish that night as well, but had been acting normal until now. After the fight, his owners could find no external wounds. Dr Riley performed a complete physical exam and informed Vladimir’s owners that he felt an abnormal swelling or mass in Vladimir’s abdomen. An abdominal mass can often be a sign of cancer and with it bring a guarded to worse prognosis based on what that swelling or mass might be. 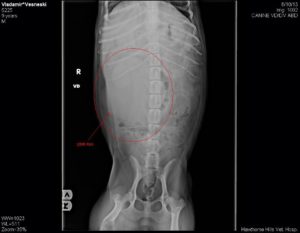 Radiographs (x-rays) of the abdomen were taken which confirmed what Dr Riley’s hands were telling him. Dr Riley discussed the radiographic results and reviewed what the possible causes might be as well as what additional tests were needed to determine the proper course of therapy. The very concerned owners stated that they wanted to do whatever they could to help their friend.

Vladimir was referred to ACCES-Seattle (Animal Critical Care and Emergency Service) for abdominal ultrasound the next day. Board certified radiologist, Dr Steve Pokorny, performed the abdominal ultrasound which confirmed the swelling or mass was associated with the spleen. The spleen is an organ that serves as a reservoir for blood, platelets and also helps with the immune system. It is also a site for some very aggressive cancers, such as Hemangiosarcoma. But today, there was no definitive bad news. Dr Pokorny felt that the swelling looked like a hematoma or, in other words, a large bruise within the capsule of the spleen. Unfortunately, to get a definitive answer that the swelling was not cancerous required surgery and removal of the spleen. Unlike humans, dogs can do very well without a spleen so partial splenic removal is not performed since those procedures can leave behind diseased tissue. Surgery was performed and the spleen was sent to the lab for histopathology (testing to find out exactly what the mass was); it was determined that the swelling was a hematoma and not cancer! Vladimir recovered from surgery without incident and returned to normal appetite and activity with the week.

While the exact cause of the hematoma could not be proven, it was suspected that during the dog fight 2 weeks earlier the spleen had ruptured causing internal bleeding into the spleen itself. The sluggishness and decreased appetite were most likely due to pain and the “mass effect” which was uncomfortable to the surrounding organs in the abdomen. Because of the enlarged spleen, sometimes owners will notice that their dog has a bloated appearance to the belly. Very often this sluggishness, decreased appetite, and concern for cancer can lead to a premature terminal diagnosis with a supposition that the best option is euthanasia (or to put an animal to sleep). For this reason, the doctors at Hawthorne Hills Veterinary Hospital remind pet owners of the importance of veterinary visits, physical exams, and proper diagnostic tests. Sometimes the news is not good; however, with proper diagnostic follow up and treatment some of these stories can have a happy ending. Just ask Vladimir’s owners.

Not every pet with a change in appetite has a major medical issue, yet it is always a good idea to schedule a visit with your veterinarian. A physical exam and discussion about the changes you are noticing at home will help determine whether something is amiss or not. Minor changes in appetite can happen in pets for some of the same reasons as people; however, anything that persists beyond a day or two warrants investigation. Remember, dogs and cats are great at hiding their symptoms. Early intervention always gives you and them a better chance of a successful outcome.