When Vomiting Means More than Just a Stomach Ache

Home » When Vomiting Means More than Just a Stomach Ache 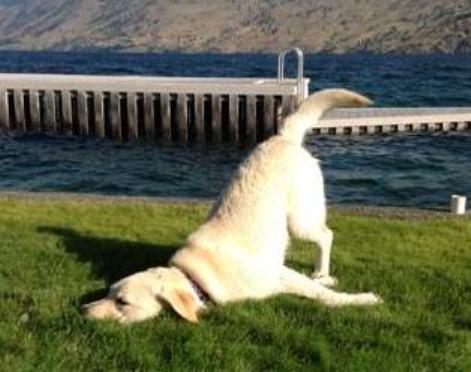 Soza is a typical young energetic Labrador with a penchant for chewing. Her owners have worked hard to supervise Soza and encourage her to chew on appropriate dog toys. However, being a puppy with a curious nature, she has not always followed the rules. Most of Soza’s chewing misbehavior has been limited to chewing on items; unfortunately this time was different.

The first sign that something was wrong was when she vomited in her crate overnight, and then vomited again in the house. It became clear that Soza wasn’t feeling right and she was brought to see our Seattle veterinarians at Hawthorne Hills Veterinary Hospital. The owners also brought in a stool sample that Soza passed which had a moderate amount of yarn type fibers; these looked like part of an antistatic yarn ball they use in the dryer. 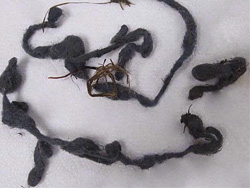 Yarn consumed by a dog which passed through the intestines without causing a blockage.

It is surprising the variety of foreign objects that dogs, and sometimes cats, ingest which eventually do pass on their own. Unfortunately some items can cause real damage, or don’t pass through the intestinal tract and need to be surgically removed. This is especially true for items like corn cobs, golf balls, fish hooks, string like materials, and batteries which are very caustic when ingested.

Initial radiographs for Soza showed a large amount of food material in her stomach and intestines but no obvious blockage and no obvious foreign object. Her vital signs were normal so she was started on intravenous fluids and an easily digested intestinal food to see if she could pass the rest of the material. For 36 hours Soza was eating well and having normal bowel movements in which she passed additional yarn. Regrettably, Soza started vomiting again. 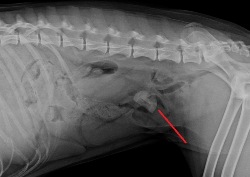 Radiograph showing a foreign object in the intestinal tract

Repeated radiographs now revealed an object within the small intestines which would require surgery. In addition to several feet of yarn, Soza had managed to chew off and swallow the top of a Kong toy. It was hidden inside the yarn and food in her stomach. With supportive care and fluids, Soza was able to pass all of the yarn, but the rubber Kong piece just wasn’t going to keep moving. Soza’s surgery was successful and she was back to her usual happy self within a few days. 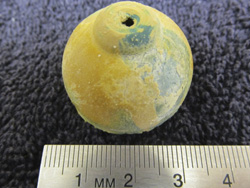 We know that many dogs are enthusiastic chewers and we want to give them toys designed to keep them entertained. While it is almost impossible to completely “dog proof” your house and yard, it is important to supervise your pets in the house and when offering new toys or chew items.

Just like children, toys for our pets need to be age appropriate, breed appropriate and durable based on their individual habits. Watch to see how they play with the toy. Do they just carry it around, or are they intent on shredding it to bits? Can they break off chunks or swallow small pieces? Some toys may be fine for one pet but not another. When toys are damaged, or begin to fall apart, toss them and buy new ones.

Finally, know your pet’s habits. If they are vomiting or just not feeling right, bring them in for a doctor’s evaluation. Intestinal problems are common. While most are not foreign body ingestions, radiographs can be very helpful and early intervention can make the difference in having a successful outcome.