This month we are celebrating some of our special pets that have recently been adopted this year!

Hawthorne Hills Veterinary Hospital in Seattle, WA is participating in the Furry 5K this Sunday June 10th which supports the Seattle Animal Shelter and this is why we have chosen these new family members to be highlighted this month.

Pet adoption is so wonderful as you will see from all of the stories below. Each time we meet a new pet parent they just glow from the joy of their experience.

If you have adopted a new pet recently please share your photos and stories with us.  Our Seattle veterinarians will look forward to meeting your new loved ones and being your partner with their care. 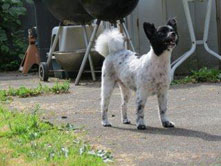 Shadow, THE BEST DOG THERE IS! ♥ We started out early because we didn’t know Bellevue very well so we had time to get lost. When we found the Humane Society it was about ten minutes before it opened at 11. We pulled into the lot and saw a line almost to the street. Both our hearts sank. We figured there was no way we were getting our dog since we were about 35 people from the head of the line. We had seen Shadow online and knew we wanted her. I asked a woman in line what the crowd was for and she said that all weekend long was half-priced kitties. After breathing a sigh of relief that we were after a dog, we got in line along with a hundred kids and their parents. Just because we were getting a dog instead of a cat didn’t mean we could cut in line. The little office was overrun with anxious adoptive parents and like a sauna only with crying children. We filled out the paperwork and waited and waited. We got her just in time because two other people asked for her as I was filling out the final papers. Now we have the sweetest dog alive and are so grateful. The Lewis Family

Sadie has been a real joyful addition to our family. She is overflowing with joy, loves to play, and never meets a stranger she does not like because she seems to feel a kinship or a connection to all people. She keeps her older sister April on her toes by annoying her until she finally consents to playing. After a good romp and play, she always lets April have a rest. Sadie is also really great with our kids. I have attached pictures of Sadie at about 2 months and 8 months old.

More cuddle time please….
Look how adorable Ripley is. She is another Pet of the Month for June 2012. Ripley is an 11 month old Pitbull adopted from the Seattle Animal Shelter in April. She is such a sweet girl. 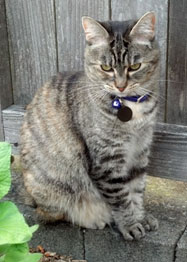 Kai in the Garden

We adopted Kai from the Seattle Animal Shelter in late March, after saying goodbye to our 15+ year old kitty pal Cleo a month earlier. Kai had been in foster care through the shelter for about a year before we adopted her. We were told that she was about two years old (we later learned when we visited Dr. Riedinger that she was probably closer to three), and that she had been abandoned with a litter of young kittens at a vet’s office in North Seattle in May 2011. The kittens had been adopted quickly, but Kai had an ear infection that took some time to resolve. Her foster family decided to delay her adoption process while the infection was healing.

The name given to her by her foster family was “Ms. Stay” – we were told because the children in the family wanted her to stay. (The foster mom told us she was their 8th or 9th foster cat and it seems the children wanted to make her a permanent family member.) After several weeks of trying to come up with a new name for her, we settled on “Kai,” which is the Hawaiian word for “sea.” The name fits her for a couple of reasons. First, like the sea, she has many colors (she is part tortie, part tabby, and the tabby part looks brown in some light, grey in others). Second, we are boaters and our prior cat Cleo loved the water and always cruised with us, and we are slowly acclimating Kai to follow suit. She’s visited the boat with us now two times and had her first cruise, to Kingston, a couple weeks ago, and clearly enjoyed it. In fact, her nickname is “Starboard,” since the tortie part of her is concentrated on her right (starboard) side. Since Cleo was a full tortie, Cleo’s memory lives on a wee bit in Kai.