When Worms Crawl Through the Lungs

Home » When Worms Crawl Through the Lungs 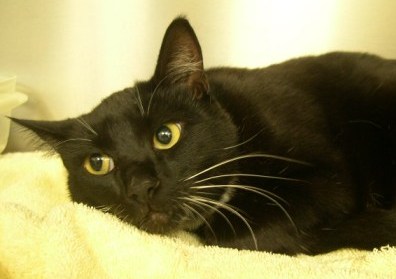 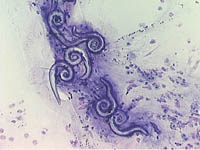 In July Sophie was taken to an emergency hospital with bleeding and swelling of the face. It was assumed that some unknown trauma occurred. Radiographs were taken to see if there was internal bleeding or broken bones. Unfortunately, although she otherwise looked great and recovered normally, the radiographs showed a mass in her lungs. The lung mass was thought to be unrelated to the trauma.

Sophie came back to Hawthorne Hills Veterinary Hospital in Seattle, WA about six weeks later to have her lungs rechecked. She was doing great and not coughing or sneezing at home but the radiographs showed that her lungs were much worse since the time of the emergency visit. Although Sophie appeared very healthy at home, her lungs were hiding severe inflammation; a change which is frequently seen associated with lungworms or bacterial infections. In Sophie’s case, the changes our Seattle veterinarians saw were most likely caused by lungworms. It can be difficult to find the lungworms in laboratory samples (feces) so we treat prophylactically with deworming medications if we are suspicious of lungworms. Sophie was prescribed a course of antibiotics and deworming medication. Three weeks later her chest x-rays looked great! The inflammation had completely resolved. 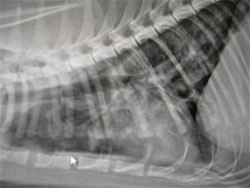 Cats become infected with lungworms by consuming snails or mice that carry the lungworm larvae. Once in the body, the Lungworms migrate through the lung tissues leaving damaged cells and inflammation behind. Surprisingly, infected pets may not show any symptoms until extensive damage to the lung tissue has occurred. By being proactive about following up on Sophie’s lung changes, her owner has spared Sophie from developing pneumonia or chronic bronchitis.

For more information about parasites and pets click here.