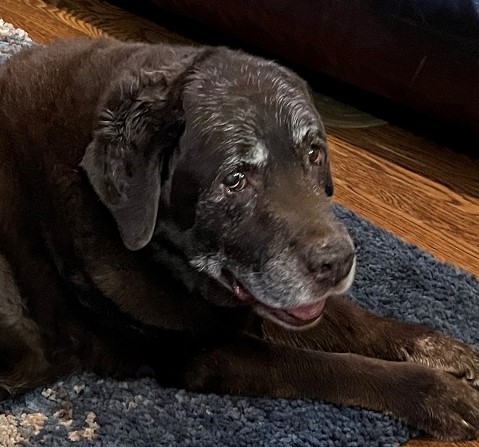 Adam is one of the friendliest, cuddliest chocolate Labrador Retrievers you can meet. He has been coming to Hawthorne Hills Veterinary Hospital since 2009. He isn’t your typical high energy food obsessed Lab, yet he has always carried a little extra weight despite the best efforts of his family. When he was young, being a little chubby didn’t seem to affect Adam as he enjoyed his walks, going to the dog park, and spending time with his family. Over the years, while his weight has fluctuated up and down, Adam has never been lean. He never showed any particular joint issues or mobility concerns until this past 12-18 months. 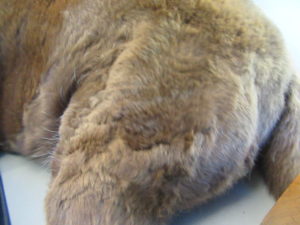 Suddenly Adam seemed old and tired. His owners were having trouble getting him into the car and with COVID restrictions getting him to the groomer, and getting him out for exercise all became more challenging. We had not seen Adam for over 9 months when he came in for an exam in September. He was a completely different dog than the one we knew. His energy was low, he didn’t have the stamina to easily walk from the car to the hospital, he had gained 10 pounds since his previous visit and was now significantly overweight. In addition, his fur looked odd – the color had changed from chocolate brown to a dull reddish brown, and he had clumps of irregular fur growth. His belly in particular was round, and he was exhibiting some coughing at home.

As our senior pets slow down, it is easy to think, ‘oh, they are just old’ and ignore, or not recognize, changes that can be treated. This is one of the reasons we advocate for exams at least twice a year. With an older dog, owners and veterinarians alike, also worry about major illnesses that might be more challenging to treat and/or carry a poor prognosis, especially when our pet’s condition changes dramatically. Things like lung disease, major organ changes such as liver disease, kidney disease, heart disease and of course, cancer are all concerns.

Adam had a thorough medical check-up. We were concerned that Adam, because of his age, could have an internal change causing his abdomen to be larger than normal, and contributing to his cough. However, other than his weight gain and the changes with his fur, we did not find any major disease. What we confirmed was his thyroid wasn’t producing sufficient hormone. We had suspected Hypothyroidism in the past but his blood values always came back as normal. Now the blood levels were quite low. He also had a urinary tract infection and elevations of several blood values that were consistent with his underperforming thyroid gland.

Adam was started on a prescription food to help manage his weight, thyroid supplementation which we expected would also help address some of the blood work changes, and he was given antibiotics to treat the urinary tract infection.

Adam, being an atypical Labrador, did not like the food we initially started him on and didn’t want to eat! You might think, how can an overweight dog not want to eat anything offered? Well, it is important to remember that low thyroid function aside, weight gain or loss, is also a reflection of genetics, habits, personality, comfort and overall well-being. Patients who don’t feel well can have a variety of changes that affect their entire body, including their appetite, and this was the case with Adam.

So, we tried several different food options, and finally settled on a prescription low-fat canned food that Adam enjoyed. By controlling the quantity of the prescription food, limiting treats, and feeding him multiple small meals he has done remarkedly well. By early October his blood values were almost back to normal ranges, his thyroid level was where we wanted it to be, and most importantly, Adam felt better! He had lost about 7#, his fur was looking more normal and his energy was improving.

In retrospect, Adam’s medical issues weren’t ‘sudden’; they were slowly progressive over time, and finally reached a point where he couldn’t hide how he was feeling. It is easy when you see your pet every day, to not notice some of the subtle changes. For the doctors, because we had been treating Adam for his whole life, but had not seen him for over 9 months, his change in appearance was dramatic.

Fortunately, once we implemented a treatment plan, and Adam started feeling better, he has been doing well. His owners have been committed to helping him slim down and have been working to get him out and walking more. He gets some low-cal carrots and vegetables as treats. We have continued to recheck Adam’s weight on a monthly basis and are monitoring his symptoms; the round belly and the cough are resolving and he is now able to enjoy walking around his neighborhood.

At his weight check appointment in early December, his owners told us that he had walked around the block TWICE for the first time in a year! He hasn’t reached his ideal weight but he is well on the way to being able to enjoy his senior years with a new lease on life. He has slimmed down from a high of 93.5# and is now tipping the scale at 78#. We think his ideal weight is going to be closer to 65-68#, yet we are now mostly focused on how he feels, not just the number.

We are so proud of Adam and his dedicated owners. His owner’s words describe his journey best: “The change has been awe-inspiring. He has been much more activated and energetic after having sunk into an all-time low of just lying around sleeping”.

Here are several photos of Adam in his younger days. What a handsome boy. 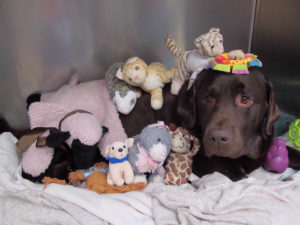