Could A Foreign Body Be Causing That Wound?

Home » Could A Foreign Body Be Causing That Wound? 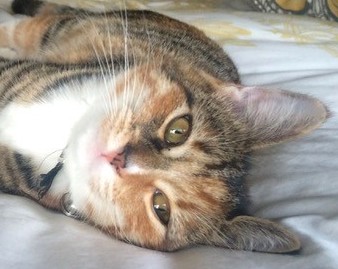 Our Pet of the Month for July is a special cat named Rey. She is a lovely 5-year-old Torbie with a history of inhalant allergies affecting her skin. She gets lesions that look like abrasions on her back legs, with areas of missing fur, that she licks at constantly. Her symptoms had flared up in March and then subsided with treatment. 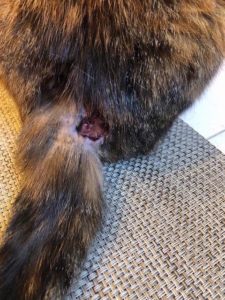 Rey and her sister cat spend time outdoors so wounds of other kinds can also happen. In fact, several years ago, Rey had an abscess in a similar location which was thought to be caused by a scuffle with another cat. In May Rey was in an altercation with a cat and sustained a wound on her backside which healed, and then in mid-June her allergies became much worse. She was biting at her rear legs until they were raw. After a visit to Hawthorne Hills Veterinary Hospital, Rey was started on Atopica to help control her allergic reactions. She seemed to be improving, although giving her medication and keeping her indoors was proving to be challenging for her owner.

In early July she started licking excessively at an area on her rump to the point that she developed a wound. Rey’s owner was concerned that her allergies were getting worse. The small wound she had on her rump was now quite large. While cats and dogs with allergies do chew, bite and lick at their skin and paws, and develop sores or have ear infections, large wounds are less common. Using local anesthetics, the fur around Rey’s wound was shaved and the wound itself was thoroughly cleansed. In gently removing some of the scabs and infected tissue, a small hole was discovered. Lo and behold! A grass awn was discovered poking deep into the tissues. 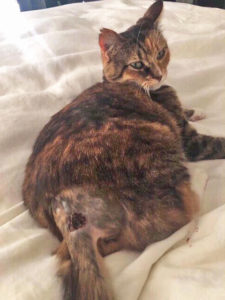 Grass awns are common during the summer months when wild grasses are going to seed. They are common along many of our parking strips, parks and anywhere grass doesn’t get mowed. The seed heads have wispy fibers with microscopic hooks that grab hold of whatever they come in contact with and pet fur is particularly vulnerable. The end of the seed is sharp and pointy and easily penetrates skin (or socks as those who go hiking through tall grass well know). Because of the hooks, the seeds don’t fall off or back out, but tend to migrate further into tissues once embedded.

Fortunately for Rey, removing the grass awn relieved her pain and discomfort, she quit licking and the wound healed well over the next two weeks. She is back enjoying the summer months and her allergies are responding well to treatment. 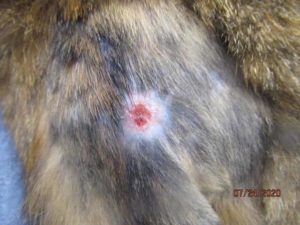 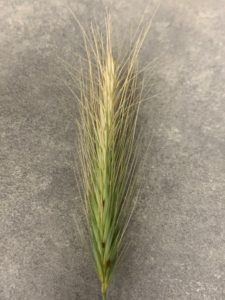 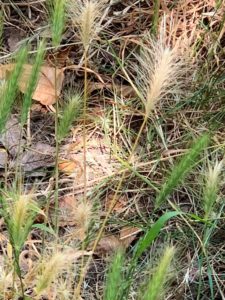 A patch of grass along the sidewalk, all with grass awns