HEARTWORM DISEASE: Could Your Adopted Dog Be Harboring Heartworms?

Home » HEARTWORM DISEASE: Could Your Adopted Dog Be Harboring Heartworms?

One of the benefits of living in the Pacific Northwest is that we don’t have some of the most serious diseases and parasites that plague pets in other parts of our country and most of the world. While the risk may be less in our area, one of the challenges of adopting pets from locations outside of Seattle, is those pets may come with diseases their new owners don’t anticipate.

Jake is our Pet of the Month for June. He is a 5-year-old yellow Lab who was originally found as a stray in Louisiana. His first owner took him to a veterinarian in 2015 where Jake was diagnosed with heartworm disease. For reasons we don’t know, Jake was started on monthly preventive medication but never properly treated for the disease. At the end of 2017, Jake was living in Washington State where he was evaluated at another facility. They also confirmed he was still heartworm positive.

Look at the incidence map to the right from the American Heartworm Society showing the areas in the United States where heartworm disease has been reported.

Jake was adopted by our clients from a private citizen in January of this year. Our goal for Jake’s initial examination at Hawthorne Hills Veterinary Hospital was to test him again using a different brand kit to be certain the test was accurate, submit additional blood for specialty testing, assess whether or not he had other health problems and then formulate a plan to manage his heartworm disease. Fortunately for Jake, he was healthy on exam without any clinical evidence of disease – no cough, no heart murmur, and normal energy.

lood tests for heartworm antigen (Ag) are the most sensitive and common test and if positive, confirms the presence of at least one adult female heartworm. There are some situations where a patient could test negative to an antigen test yet still have heartworms present.  If heartworm is suspected then additional testing is necessary.  If there are female worms we also want to know if they are reproducing, so before deciding on a treatment plan, it is important to confirm whether or not the patient also has microfilaria (baby worms) circulating in the blood. Jake was consistently positive on the antigen blood test but he was fortunately negative for circulating microfilaria. This suggested that he might not have a heavy load of worms.

The next step in Jake’s treatment plan was to continue the monthly preventive, which kills several stages of the circulating larvae if they are present, get chest radiographs to evaluate his heart and lungs for evidence of the typical changes consistent with long standing heartworm infection, and then determine the schedule for drug treatment. Because the adult worms live within the heart

and the major blood vessels exiting the heart, untreated they can eventually cause heart failure and death. Treatment to kill the adult heartworms is not a simple matter either and requires multiple steps in a coordinated fashion – killing them too quickly can cause clots of dead worms to circulate to other areas of the body which would be devastating.

The specific treatment plans for each patient are customized based on the pet’s overall health, the anticipated worm burden, the risk for side effects to the treatment, and the patient’s response to each stage of treatment. The full course can take up to six to nine months. We are happy to report that Jake has done great during all stages of his treatment and we will continue to monitor him for the next number of months. We expect him to enjoy many years ahead with ‘his people’.

The following are from the American Heartworm Society: 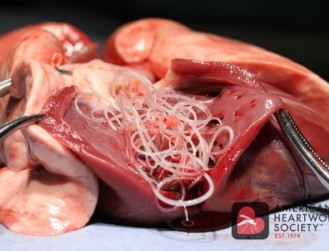 American Heartworm Society – image of worms within a heart