When Your Pet Makes Ribbon Into a Holiday Treat.

Home » When Your Pet Makes Ribbon Into a Holiday Treat. 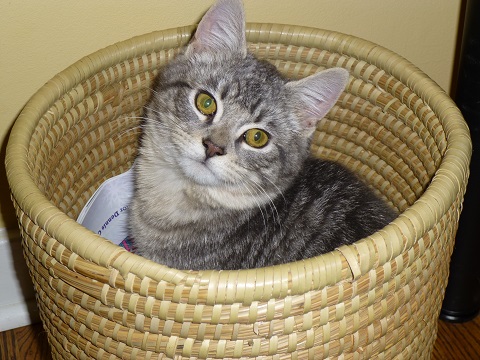 Marcus is a young, adventurous cat. He loves to play, particularly with ribbons. During the holidays he loved “helping” wrap gifts. This was fun until Marcus decided to make the ribbon a nice holiday treat. 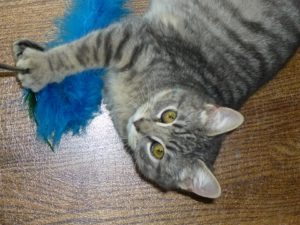 Ribbon and string are common material that can cause intestinal obstructions in cats. This usually occurs when the cat is playing with a ribbon and they will accidentally swallow the string/ribbon. After the ribbon is swallowed three things can happen.

Marcus, unfortunately, fell in the third category. He vomited up 3 pieces of red ribbon and the next day was not eating and lethargic. He was brought into our veterinary hospital and examined. It was decided that he needed to have abdominal x-rays to look for an obstruction.

Most foreign bodies do not show up well on x-ray. What veterinarians look for with linear foreign bodies, are bunching of the intestines called plication or dilation of the small intestine.

Marcus’s x-rays were challenging to interpret as the radio-graphic signs of a foreign body were not easily found. Only one view where Marcus was laying on his back demonstrated intestines with mild plication and mild dilation of his small intestine. See the red arrows on the x-ray that outline the abnormal intestine. The two other views that were taken with Marcus lying on his side would not have been diagnostic for a foreign body. The x-ray findings in combination with his vomiting and inappetence made the diagnosis of a linear foreign body highly likely. 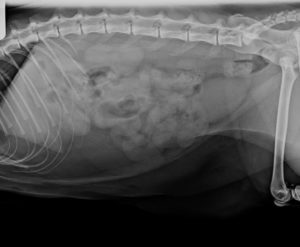 Once a diagnosis of a foreign body is made it is important that surgery is done to remove it as soon as possible. The longer that there is an intestinal obstruction, the higher the risk that the intestine will be deadly, or the intestine perforating. This makes the complications of surgery much higher and increases risk of death.

Marcus was brought promptly to the hospital and he was diagnosed quickly. He was able to have surgery that same day and an additional 18 inches of ribbon was removed from his stomach and small intestine.

He made a great recovery and is now not allowed to play with ribbons anymore!

Holidays prove to be a particularly dangerous time for foreign body ingestion in both cats and dogs. Tinsels and ribbons are particularly dangerous to cats. Try and keep ribbons and strings in secured pet proofed places especially during holidays. If you have cats it is recommended to not put up tinsel as this is a common source of foreign body ingestion during the holiday season. If you are concerned your pet has ingested something, it is important to take them to be examined by a veterinarian. With foreign bodies, time matters! The faster that the foreign body is found the better the outcome for your pet.