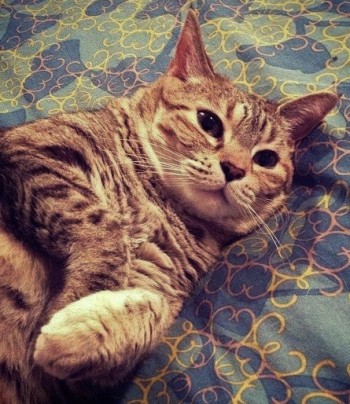 The holidays can be stressful for cats for many reasons: house guests coming and going, furniture rearrangements, and owners leaving for days at a time. Many cats show their distress by hiding in the closet or under the bed; some lash out at their owners, visitors or furniture; and some urinate inappropriately throughout the house. Others, like our April Pet of the Month, Macy, show their stress by boycotting food.

Macy is a 13 year old domestic shorthair cat who had always been a relatively healthy kitty until last December. Macy’s family had houseguests visiting and with all the commotion happening in the house, Macy’s appetite decreased and she quit eating altogether. After a few days, she started vomiting and Macy was taken to Hawthorne Hills Veterinary Hospital for an examination.

During the exam, Dr. Shawna Wedde noticed that Macy was dehydrated and had lost 1.5 pounds, which was over 10% of her body weight. Dr. Wedde discussed the importance of testing Macy’s blood to find out if she had an underlying disease with her kidneys, liver or thyroid gland. She treated Macy with subcutaneous fluids and sent her home with an appetite stimulant while awaiting the bloodwork results.

The following day, Macy still wasn’t feeling well and refused to eat despite being given the appetite stimulant. Dr. Wedde received the blood results which indicated that Macy had a disease called “Hepatic Lipidosis,” commonly known as “Fatty Liver Disease.”

Hepatic Lipidosis occurs in overweight cats when they stop eating and lose weight too quickly. This results in abnormal fat accumulation in the liver, causing increased bilirubin in the bloodstream. This can make their skin appear yellow, called “Jaundice.” Cats with hepatic lipidosis are very nauseous and will refuse food when offered to them.

Luckily, hepatic lipidosis has a fairly good prognosis with proper treatment. This includes supportive care with intravenous or subcutaneous fluid therapy, liver protectants, possible antibiotics, and nutritional support. Nutritional support is the most important treatment for hepatic lipidosis; however, feeding is difficult because the cat is nauseous and refuses to eat. Force feeding cats carries the risk of aspiration pneumonia and continued food refusal. The best and safest option is to place an esophageal feeding tube, which allows the caretaker to easily provide nutrition through the tube until the cat is willing to eat again.

Because Macy was unwilling to eat, Dr. Wedde suggested the placement of an esophageal feeding tube to provide nutrition to Macy while she recovered. Macy had an esophageal tube placed and was treated with liver protectants, antibiotics, and anti-nausea medications. She received all her caloric needs through her feeding tube with a liquid diet. After about one week, she began to eat some dry food kibbles. Gradually, she began to eat more and more food on her own. After about 5 weeks, Macy was consistently eating food and was feeling great! Dr. Wedde removed the feeding tube and rechecked her bloodwork. She was happy to see that Macy had made a complete recovery!