Can Your Pet’s Food Make Them Sick?

Home » Can Your Pet’s Food Make Them Sick? 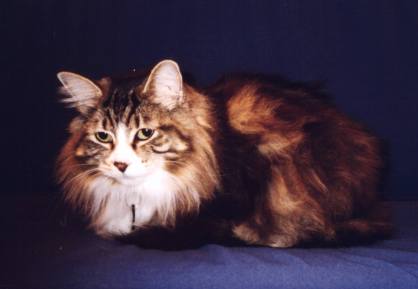 Our Seattle veterinarians explore the importance of proper feline nutrition

We are celebrating Cougar’s almost 20 years of life and bringing attention to an intestinal ailment that is seen fairly commonly in cats everywhere, not just in the Seattle area. Cougar was a healthy, happy kitty for the first 13 years of her life, only needing to go to the vet once or twice a year for regular checkups. In early 2006, things changed dramatically. With the help and guidance of the veterinarians at Hawthorne Hills Veterinary Hospital in Seattle, WA and the diligence of her owners, Cougar was diagnosed with food related Inflammatory Bowel Disease (IBD).

Cougar’s symptoms started with vomiting. Anyone who has owned a cat is familiar with their habit of occasionally vomiting hairballs which many of us might dismiss as “just being a cat”; for Cougar the vomiting was unusual and frequent. A physical examination at our hospital uncovered some additional changes:

All of these indicated a need for more investigation.

Cougar’s owners wanted to approach her work-up in a step wise fashion, starting with the least invasive tests and treatment plan, hoping that she would respond and feel better. Initially Cougar improved, but unfortunately her symptoms progressed.

Additional Testing was in order:

Knowing whether or not Cougar had Lymphoma was important to her owners. She was thirteen years old and they didn’t want to put Cougar through extensive treatments if she wasn’t going to be comfortable and happy for the long term. A definitive diagnosis was needed, and that required an exploratory surgery to get biopsies of her tissues.

Dr. Robin Riedinger (Veterinarian at Hawthorne Hills Veterinary Hospital) performed the exploratory surgery and in April 2006 we had an answer. Cougar had Inflammatory Bowel Disease, most likely caused by a food allergy; thankfully there was no evidence of cancer.

With the help of the internist, our Seattle veterinary hospital team formulated a very specific treatment plan for Cougar.

Cougar wasn’t so happy to be on medications, but with encouragement from her owners, and guidance from her doctors, over an extended period we ultimately controlled her symptoms. Cougar was fed a Venison food first while we treated the inflammation and then changed to a novel food for the long term. She loved her new Duck and Potato food and has continued to be symptom free on just this one food for over 7 years.

Sometimes it is easy to think, couldn’t we have just changed Cougar’s food and avoided all of the testing? The answer unfortunately is no. The symptoms Cougar had are not specific to IBD so getting a proper answer is better for long term planning and treatment. Sometimes a diet change by itself works if we are lucky; more often the symptoms persist or recur. With severe inflammatory bowel disease, it is essential to properly control the inflammation and make specific food changes based on what the pet has eaten in the past. In Cougar’s case we also needed to be sure that cancer was not part of her problems as that would have changed her treatment and prognosis.

The following link at VeterinaryPartner.com has a good discussion for those wanting more information.